Soles of Hope: Giving Back a Step at a Time

Sometimes, a pair of shoes is just a pair of shoes. Other times, it’s the first step toward a better life. Fred Yeboah, Network Engineer for Millennium Trust, can tell you why.

Eight years ago, Fred’s wife Opokua (OP) woke him in the middle of the night and said, “We have too much. We have to do more.” Instead of rolling over and going back to sleep, Fred asked her if she had a plan. She didn’t, but together they came up with one: feeding 1,000 people on Christmas every year. They started cooking on December 24 and drove around Chicago on Christmas Day giving food to homeless people.

A few years later, they took their four sons to visit their homeland of Ghana. While they enjoyed the country’s beautiful sights, they also showed them the slums and shanty towns. The boys were in shock. They saw images on TV of Ghanaian children on their way to school – only half of them wearing shoes, and those with shoes had holes in them. A second idea was born: Soles of Hope.

Growing up in Ghana, Fred had lived the life they’d seen on TV. He’d owned one pair of shoes, and they were torn up and had holes in them. He put cardboard in to protect his feet. He’d been so poor he’d eaten dirt for dinner so his stomach wouldn’t ache from hunger.

When the family returned to Chicago, Fred asked permission to put a shoe collection box in the Millennium Trust reception area, taking any shoes as long as they were hole-free. OP ran a similar drive at her place of employment. They went to Walmart and bought school supplies and bags of rice on sale at Costco. MTCares, Millennium Trust’s community outreach program, sent out an announcement about the shoe collection and offered to pay for shipping.

OP accompanied the goods back to Ghana. They randomly chose a northern village, Kpandai, in the poorest area of Ghana as the recipient of the donations. It took 12 hours to reach the village by dusty roads and a long ferry ride. But when a small boy picked up a pair of girl’s shoes and exclaimed, “Yay, I found my size!” not knowing the difference, they knew it was all worth it.

Watch the video of OP visiting the village of Kpandai and delivering supplies to the children below: 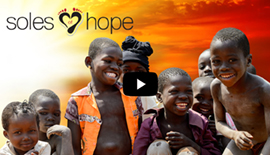 Once there, OP realized there were bigger problems in Kpandai, starting with no drinking water. Women and children walked miles every day to get fresh water from a stream and carry it back to the village. Soles of Hope set up a pipe-borne water system in the middle of town that delivers fresh water for villagers. She also learned from the school’s headmistress that there were many orphans in need of funds for the school year. She asked how much it cost to care for a child for the school year – the answer was $90. The family emptied their bank account to help support them.

The chief of the village asked OP why the Yeboahs were not helping people in Eastern Ghana, where they were from. OP’s answer: Everyone has a need. The chief installed OP as Queen of Progress for Kpandai.

Soles of Hope is not without its irony. Fred remembers when he met his wife in Boston in 2000, she owned 98 pairs of shoes. At one point, their son counted 126 pairs. Today, OP proudly owns 12 pairs of shoes. “Who needs all those shoes?” she says.

“There are adults who need footwear, as well,” notes Fred. “We’ll take anything that can be useful to someone in the village. Before you throw something out, ask yourself if it could help a family in Africa.”

At a recent Millennium Trust Town Hall, Fred was asked why he has not turned the administration of the program over to a contact in Ghana. His answer was that he hasn’t found someone he trusts fully yet. The Yeboahs prefer to do the work themselves, so they can see where the goods go and ensure that they get there intact.

MTCares is currently collecting school supplies and putting them in straw bags for the students in Kpandai. After OP witnessed a small girl grabbing a Macy’s paper bag and exclaiming, “Oh good, I found a school bag!” she decided that every child will have a school bag of their own.

The next project Soles of Hope is undertaking is to create a village library. A woman Fred knows went to a book fair and bought 100 books – he requested that she sign every one. Fred likes to create a sense of connectedness between donors and recipients. He even dreams of creating an international book club.

What does the future hold for Soles of Hope? Possibly the rescue of some actual souls. On the ferry to Kpandai, the Yeboahs noticed young children working on fishing boats. They learned that the poorest families in the region are occasionally forced to sell their children into what amounts to slavery in order to feed them. “We are working on plans to rescue and rehouse these children,” says Fred.

What’s Fred’s favorite word? “Humanity,” he says with a smile.

At MTCares’ request, the Yeboahs have registered Soles of Hope as an official not-for-profit charity. To learn more about Soles of Hope or make a donation, view their website at solesofhope.org.

MTCares 2018 Year in Review: Millennium Trust Employees Share Their Passions to Give Back Across the Globe